My encounter with an elite marathon runner


Last Sunday Jan 19th, I volunteered at the Houston marathon 2014. After the race, I got an opportunity to meet a few of the dazzling runners who all finished the race within 2 hours and 30 minutes. Mesmerized by their performance, I was looking for an opportunity to chat with a couple of them.  I noticed a guy standing in the corner calmly sipping his protein shake. I approached him and greeted him with a smile. He had flown all the way from Virginia to participate in the race! We talked for about 15-20 minutes on various topics related to long distance running. As a novice runner who recently sensed the joy of running, I was eager to tell him about my ongoing preparations for half marathon. I also told him about how I had been following a rigorous schedule and running almost 40 miles a week (Check my blog link) to deliver the best performance.

But when I heard what he advised me, I immediately understood the flaw in my training program and how I was inviting injury to strike me. He said there are two things cardinal to a long distance runner, if you want to enjoy it for a long time. First is that “Don’t overdo it” and second “let your brain gradually work on your endurance”. In other words – don’t force the body to quickly get into long distance running because it may back fire resulting in a big injury which could altogether put a stop on your endeavor. Go at your own pace, don’t compete with anybody and speed does not matter a lot here, what matters the most is the sense of accomplishment you cross the finish line.

That was a decent eye opener for me as I realized that I was too quick in my preparation. I enjoyed running thoroughly and never cared about the negative impact of my actions. Boy, this could shorten my stint with running sooner than later. I want to enjoy running for my entire life now and it has become a hobby for me which gives pleasure and motivation to be cheerful every day. Keeping that in mind, I revised my running calendar as shown below. I am feeling much better now and my body has also responded positively to this change. Many thanks for the expert advice from that Virginian runner. 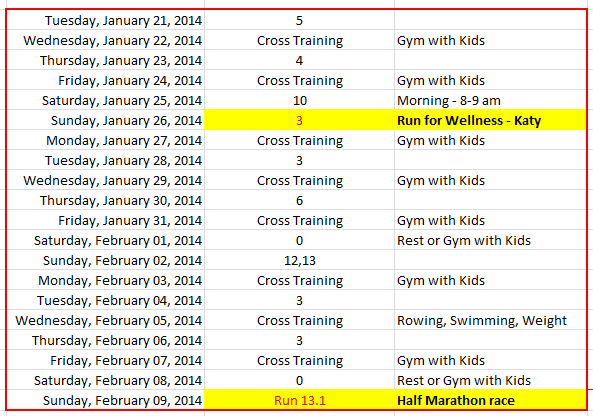