My official first half marathon story - Houston Rhythm and Blues

It's a fact that for a runner, first half marathon and marathon will forever be imprinted in the mind. Today was my first official half marathon and I experienced this fact myself. It was gratifying as well as strenuous, unexpectedly humorous and inspirational at the same time. I felt the overwhelming joy of reaching 13.1 miles without stopping for a second. Clearly, I was not the best runner in the lot but sensed the universal pride that comes from accomplishing the first half marathon. I am thrilled to narrate the short story of this eventful day for blog readers and hopefully be able to spark an interest in those of you who aspire to be future marathon runners.

The race was to start at 8:30am at downtown Houston’s historic Sam Houston Park. My daughter Navya and I started early in the morning so that we could be there at least 30 minutes before the race. My son had a sleepover last night in our house, so he could not come and neither could my wife. But, again they are going to get more opportunities in future for sure because I have many more races planned this year. True to its name, “Houston Rhythm and Blues Half Marathon”, the atmosphere was electrifying. We were told by the organizers that 15-16 selected Rhythm and Blues bands from throughout Texas would be playing throughout the running course to cheer up all the runners. I did not realize at that moment how that positive encouragement could help motivate me straight to the finish line.

The race commenced around 8:30 and I crossed the starting line nervously yet feeling the excitement. As I trained for it, many of my forum friends gave me the usual warnings to “respect the distance,” and pace myself conservatively. I was advised against not setting a goal that seemed “too ambitious” for the first official 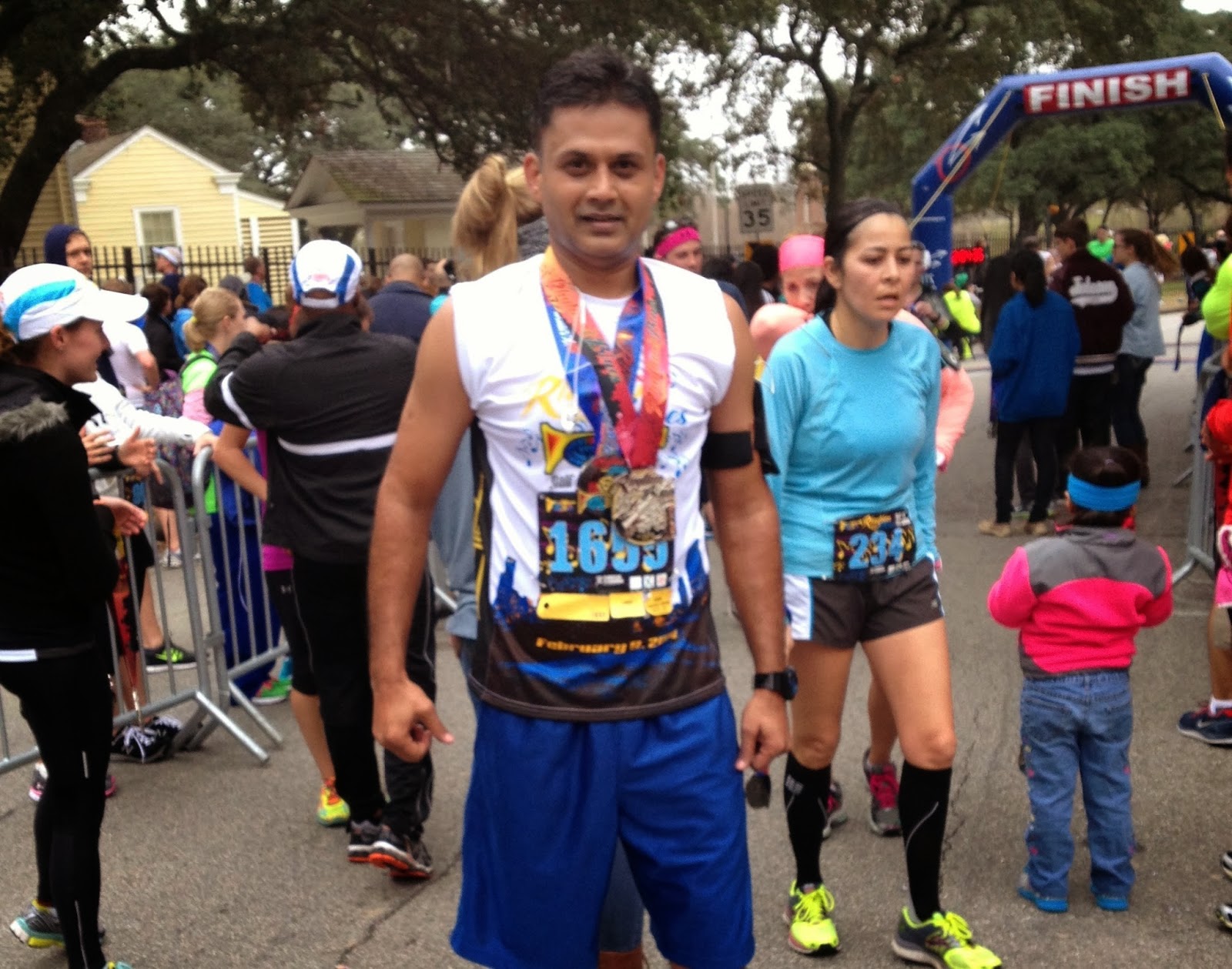 run. I truly believed that and tried to heed to their advice. That being said, I had this target of finishing the race within 2 hours in my mind. I was going at my own comfortable pace which I used to maintain during my practice runs. I was not trying to run very fast yet maintained my goal speed each mile. At the first water station after 2 miles, a few runners took a sip of Gatorade or water; I decided to run continuously instead. During practice runs too, I seldom drank any water so I adhered to that self-imposed rule. First six miles passed by without any fuss, racing to the beats of live bands along a spectator filled course. I was happy with my performance so far because my body was coping up well and was handsomely cruising along towards my goal of finishing the race well below two hours. Exactly then I noticed the change in the elevation of the course which brought my speed down a little. It was a deterrent but could not dampen my spirits to finish the race in two hours (2:01:43:4 to be exact). For my last mile, I had a plan to run it in 8 minutes which I did overtaking quite a few runners just before the finish line.

The overall feeling of crossing that line and finishing the race is difficult to put into words. It’s an adrenaline rush like no other. And then the post run FUN begins. After having a few pictures taken first by my daughter who was visibly very excited that her dad did it and then by the professional photographer, we moved to the staged area where a popular Texan band was playing mainstream music. When I looked at different booths for food, drink and fitness related advertisements, I noticed one line to be the longest. To my pleasant surprise, that was the beer line for the runners and I also joined that crowd for a mug of draught beer. There were people dancing and singing along with the band while some of them still eagerly waiting for their dear ones to complete the race. We stayed there for one hour or so then decided to head out home after enjoying a memorable day at an amazing race!